These materials are under construction and may be incomplete.

What is delivered as part of the course¶

Ontologies provide a logical classification of information in a particular domain or subject area. Ontologies can be used for data annotations, structuring disparate data types, classifying information, inferencing and reasoning across data, and computational analyses.

Difference between a terminology and an ontology¶

A terminology is a collection of terms; a term can have a definition and synonyms.

An ontology contains a formal classification of terminology in a domain that provides textual and machine readable definitions, and defines the relationships between terms. An ontology is a terminology, but a terminology is not (necessarily) an ontology.

The OBO Foundry is a community of ontology developers that are committed to developing a library of ontologies that are open, interoperable ontologies, logically well-formed and scientifically accurate. OBO Foundry participants follow and contribute to the development of an evolving set of principles including open use, collaborative development, non-overlapping and strictly-scoped content, and common syntax and relations, based on ontology models that work well, such as the Gene Ontology (GO).

The OBO Foundry is overseen by an Operations Committee with Editorial, Technical and Outreach working groups.

Some considerations for determining which ontologies to use include the license and quality of the ontology.

Licenses define how an ontology can legally be used or reused. One requirement for OBO Foundry Ontologies is that they are open, meaning that the ontologies are openly and freely available for use with acknowledgement and without alteration. OBO ontologies are required to be released under a Creative Commons CC-BY license version 3.0 or later, OR released into the public domain under CC0. The license should be clearly stated in the ontology file.

Some criteria that can be applied to determine the quality of an ontology include:

How to determine which is the right ontology to use?¶

Data can mapped to ontology terms manually, using spreadsheets, or via curation tools such as:

The figure below by Chris Mungall on his blog post on How to select and request terms from ontologies describes a workflow on searching for identifying missing terms from an ontology. 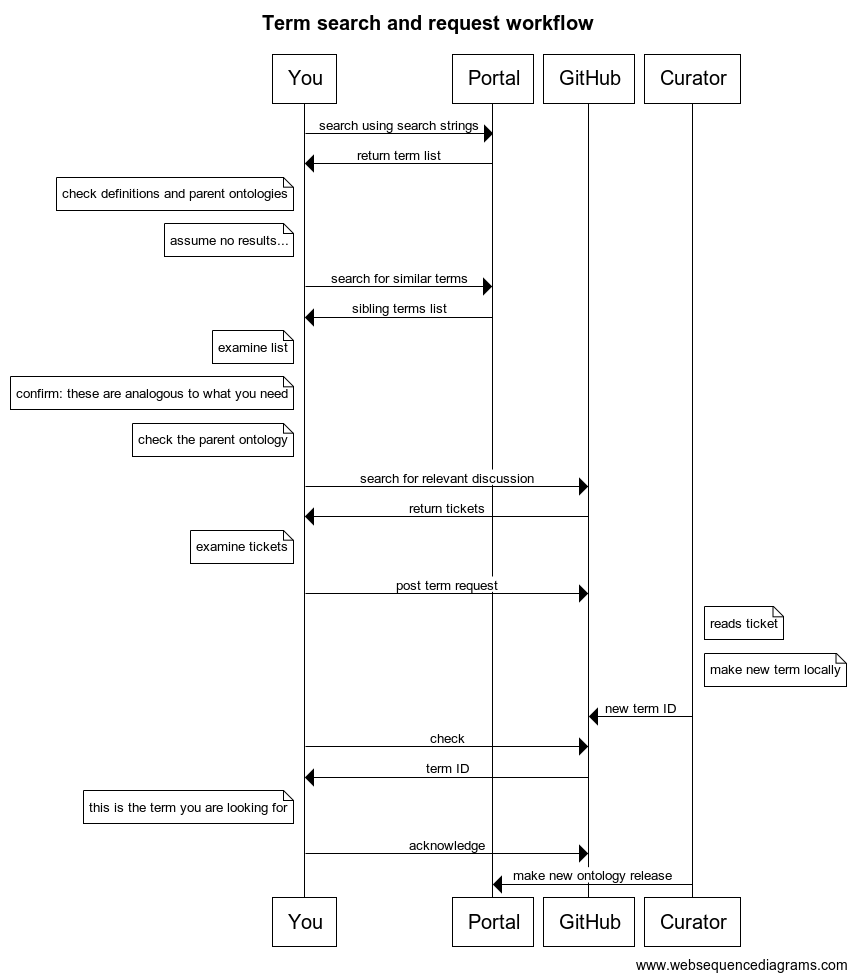 8. Differences between IRIs, CURIEs, and labels¶

A uniform resource identifier (URI) is a string of characters used to identify a name or a resource.

A URL is a URI that, in addition to identifying a network-homed resource, specifies the means of acting upon or obtaining the representation.

A URL such as this one:

The protocol tells you how to get the resource. Common protocols for web pages are http (HyperText Transfer Protocol) and https (HTTP Secure). The host is the name of the server to contact (the where), which can be a numeric IP address, but is more often a domain name. The path is the name of the resource on that server (the what), here the Uberon anatomy ontology file.

A Internationalized Resource Identifiers (IRI) is an internet protocol standard that allows permitted characters from a wide range of scripts. While URIs are limited to a subset of the ASCII character set, IRIs may contain characters from the Universal Character Set (Unicode/ISO 10646), including Chinese or Japanese kanji, Korean, Cyrillic characters, and so forth. It is defined by RFC 3987.

A Compact URI (CURIE) consists of a prefix and a suffix, where the prefix stands in place of a longer base IRI.

By converting the prefix and appending the suffix we get back to full IRI. For example, if we define the obo prefix to stand in place of the IRI as: http://purl.obolibrary.org/obo/, then the CURIE obo:UBERON_0002280 can be expanded to http://purl.obolibrary.org/obo/UBERON_0002280, which is the UBERON Anatomy term for ‘otolith’. Any file that contains CURIEs need to define the prefixes in the file header.

A label is the textual, human readable name that is given to a term, class property or instance in an ontology.